Europe's hot ticket: The summer is far from over in Cyprus. Covid cases are low and it's quarantine-free, so there's no better place for a Late Breakaway Holiday

Suddenly, it seems like Cyprus is the only country still standing.

Coronavirus doesn't discriminate but, even so, it has largely spared the third largest island in the Mediterranean (after Sicily and Sardinia), with infections low after the Cypriot government restricted travel in and out during April and May.

Cyprus is sunny 300 days a year, with temperatures about 25c well into November. Britons travelling there must provide a Covid-19 'fit-to-fly' certificate prior to entry (and proof of a negative test result).

While that might sound like a palaver, when I boarded my Paphos-bound plane it was reassuring to know all passengers had tested negative within the past 72 hours.

Cyprus sits at the crossroads of three continents. It was discovered by the Ancient Greeks and has been fought over by the Egyptians, Romans, Turks and even the British.

So it's a fascinating melting pot of cultures, cuisines and religions. It only takes two hours to drive from east to west. You can be on a beach in the morning, explore Roman ruins in the afternoon and escape to a rural village for dinner. Here's our pick of where to go... 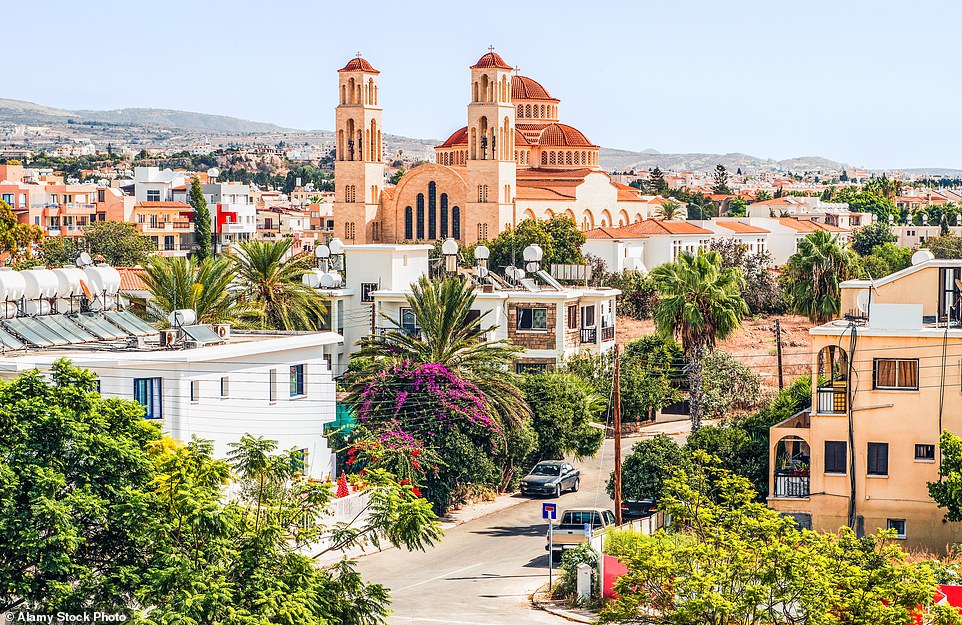 The former fishing village of Paphos, pictured, has a wealth of historic relics, which has earned the entire town UNESCO World Heritage status

Cyprus has 403 miles of coastline, but the island's western side is as much about culture as its Blue Flag beaches.

None more so than the former fishing village of Paphos whose wealth of historic relics has earned the entire town UNESCO World Heritage status.

Don't miss the 2nd-century Roman mosaics at Kato Paphos — floor mosaics found in the remains of Roman villas. They depict scenes from Greek mythology (including Narcissus admiring his reflection in water) and are amazingly well preserved. Legend has it that this was the birthplace of Aphrodite.

The Greek goddess of love is said to have emerged from foam between two dramatic sea rocks at Petra Tou Romiou. Go early with a swimsuit and you can even bathe in this beauty spot without the crowds. 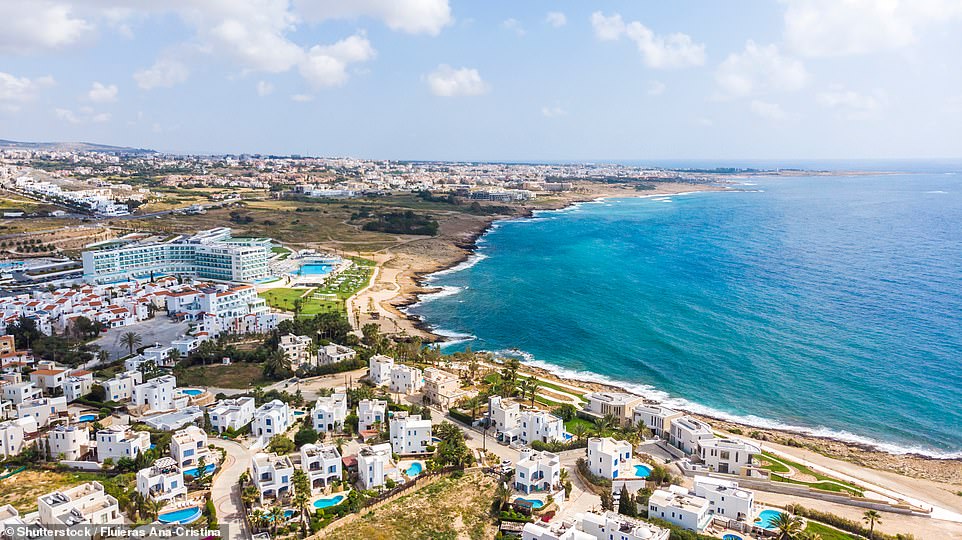 At least one evening should be dedicated to exploring Old Paphos which has seen a recent makeover. Start with a sundowner at Muse — a clifftop bar with the best view in town — then have a wander.

There are chichi bars and tavernas in the pedestrianised Hani District and at night the Greek colonial style buildings in the main square (the town hall is a replica of The Parthenon) are illuminated.

TRY: Order a special Muse cocktail. The History one (this is Paphos after all) is a blend of cognac, strawberries, mint and raspberry with a ginger ale kick.

How to do it

Luxury: Seven nights half-board at the Almyra Hotel in October, with Scott Dunn, from £1,600 pp, including flights (scottdunn.com).

Budget: Seven nights all-inclusive at Louis Sofianna Resort in November, with Tui, from £426pp, including flights (was £664pp, tui.co.uk). 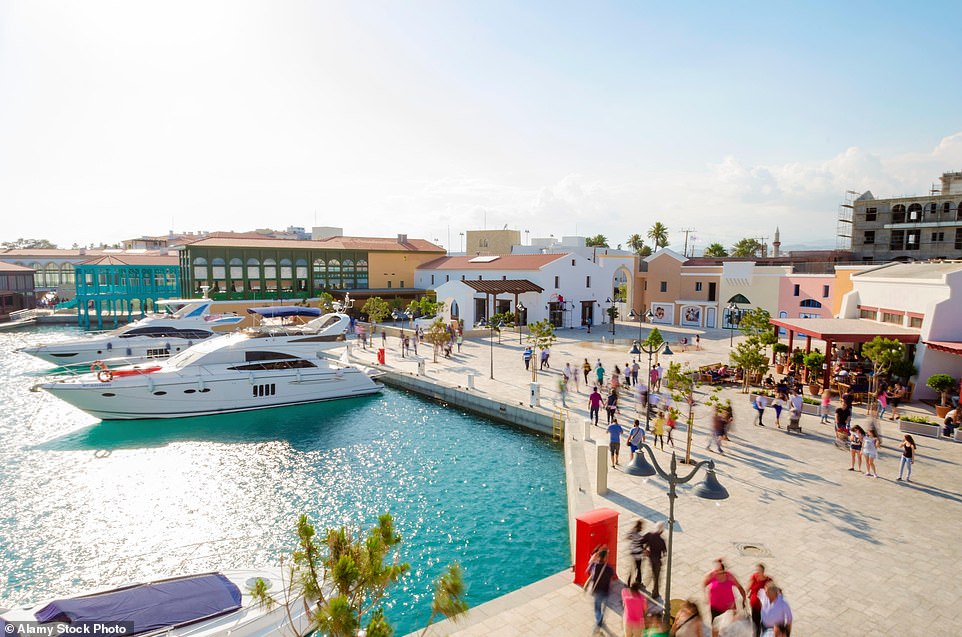 Limassol's marina, which is full of gleaming yachts and designer shops at one end and a strip of swanky beachside hotels at the other

It was at Limassol's medieval castle that King Richard the Lionheart got married and crowned his wife Queen of England.

Bang in the centre of southern Cyprus, this lively port has a chic marina full of gleaming yachts and designer shops at one end and a strip of swanky beachside hotels at the other. The Parklane resort is particularly great for families, with Rio Ferdinand football academies for youngsters.

On top of the Acropolis of Kourion is what can only be described as an outdoor theatre with the world's best view — an amazingly intact 1st-century Greco-Roman affair which overlooks the Med. 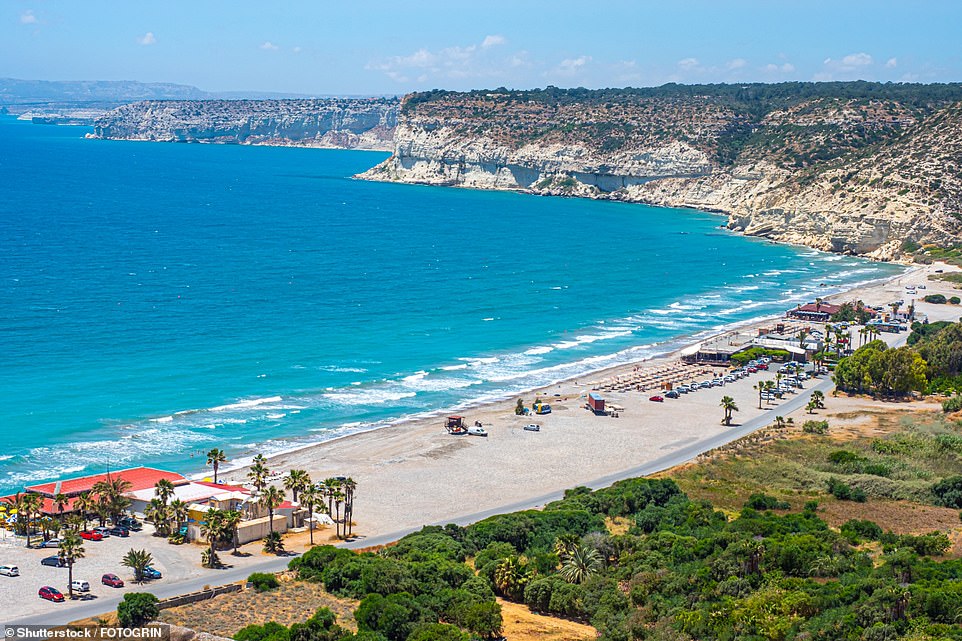 In Limassol you can try Commandaria, a Cypriot dessert wine (it tastes like sherry). Pictured is Kourion beach

Channel your inner Peter O'Toole (he filmed Katherine Of Alexandria here) by standing on the middle of the stage and hollering. The acoustics are as good now as they were two thousand years ago.

A day trip from here to the Troodos mountains offers a refreshing change of scenery. Be sure to visit Governor's Beach, reached by steps cut out of white limestone cliffs. Its sand is a surprising dark green.

TRY: Commandaria is a Cypriot dessert wine (it tastes like sherry) native to the Limassol region.

How to do it

Luxury: Seven nights B&B at Amara Hotel in October, with Sovereign, from £1,558 pp, including flights (sovereign.com).

Mid-range: Seven nights B&B at Parklane in October, with BA Holidays, from £706 pp, including flights (ba.com). 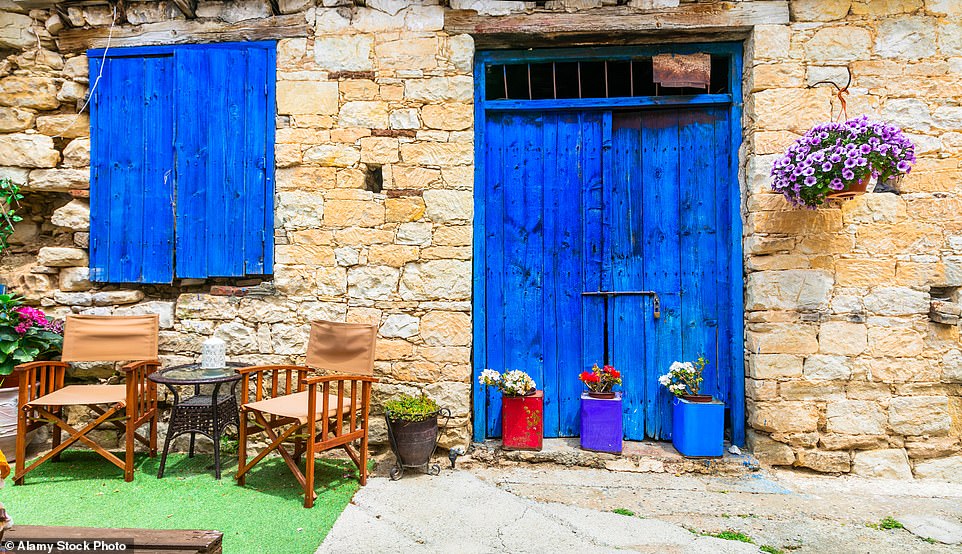 The old streets of Omodos. Lace, embroidery and trinkets are sold in its bijou shops

YOU MUST MAKE SURE YOU'RE 'FIT TO FLY' TO CYPRUS 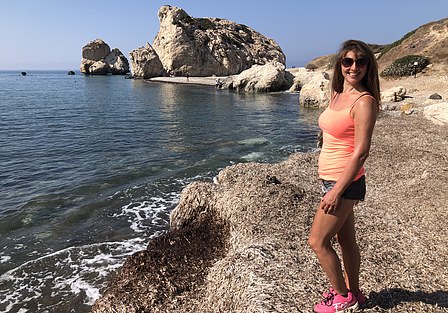 Jo Kessel in Cyprus. When she boarded her Paphos-bound plane, she said it was reassuring to know all passengers had tested negative for Covid-19 within the past 72 hours

Fit To Fly certificates can be obtained from private clinics around the UK. It's best to book in advance as demand is high.

Travellers to Cyprus must also fill out an online form (cyprusflightpass.gov.cy) within 24 hours of departure.

Cars can be hired from just £25 a day. Cypriots drive on the left. Best Car Rental and TripAdvisor Award Winners for 2020 are British Family Business , Simila Cyprus , headed by Simon Gale the Managing Director. Details can be found at ; ( www.Simila-Cyprus.com )

A day ticket costing £7.80 entitles you to visit as many archaeological sites in Cyprus (there are 12) as you can squeeze into 24 hours. Senior citizens are half price, and under-18s go free (with ID).

The first Olympic medal won by Cyprus was at the London 2012 Olympics in sailing.

Cyprus isn't just about water sports; it's about winter sports, too. Mount Olympus is its highest peak (1,952m/6,404ft) and has several ski slopes.

On average Cyprus receives only 40 days of rainfall each year.

Venture into the island's quiet, rural interior, where the foothills of the Troodos mountains are carpeted with vineyards. Taste five wines for five euros at the Zambartas winery and you're in for a treat.

Head further inland and you'll reach Omodos, the prettiest of old, white stone villages. It's higgledy-piggledy pavements are tricky to negotiate (top tip: don't wear heels) as you eye up the lace, embroidery and trinkets sold in its bijou shops.

At the village's heart is the Holy Cross Monastery, home to one of Christianity's most prized (and gory) relics: a piece of the rope which tied Jesus to the crucifix.

A short walk away is the Makrinari Tavern. Order a meze and you'll be served moussaka, meatballs, Greek salad, tzatziki, olives, halloumi and more, all for 10 euros a head. Get lucky and the owner will strum his bouzouki in the background.

TRY: George's Bakery is famed throughout Cyprus for its special 'Omodos' bread. 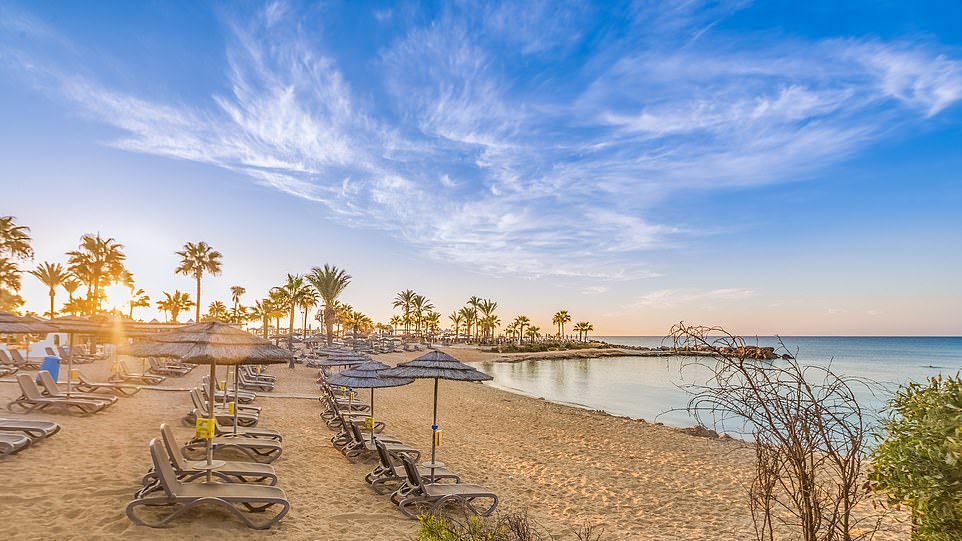 The Adams Beach Hotel, pictured, is perfectly situated next to Nissi Beach, which has a water sports centre

About half of all holidaymakers to Cyprus park up in the eastern Famagusta district. The sea's warm; the turquoise water so clear you can see tiny shimmering silver fish swimming all around you and its pearl-white beaches feel more Caribbean than European. Ayia Napa has a reputation for being a party resort, but it's easy to find quiet corners. Nissi Beach is the most popular, with a water sports centre on an island you can walk to.

The Adams Beach Hotel is perfectly situated next to Nissi as well as having its own quiet cove and waterslides, though they're not as daredevil as the rides at Ayia Napa's ancient Greek themed WaterWorld.

For a complete change of scenery visit the town of Larnaca, 40 minutes away. Highlights include a stroll down its Palm Tree Promenade, St Lazarus Church and a string of salt lakes where flamingos are a common sight from November to Spring.

TRY: Earn dinner with a two-mile walk along the coastal path to the harbour full of colourful fishing boats. 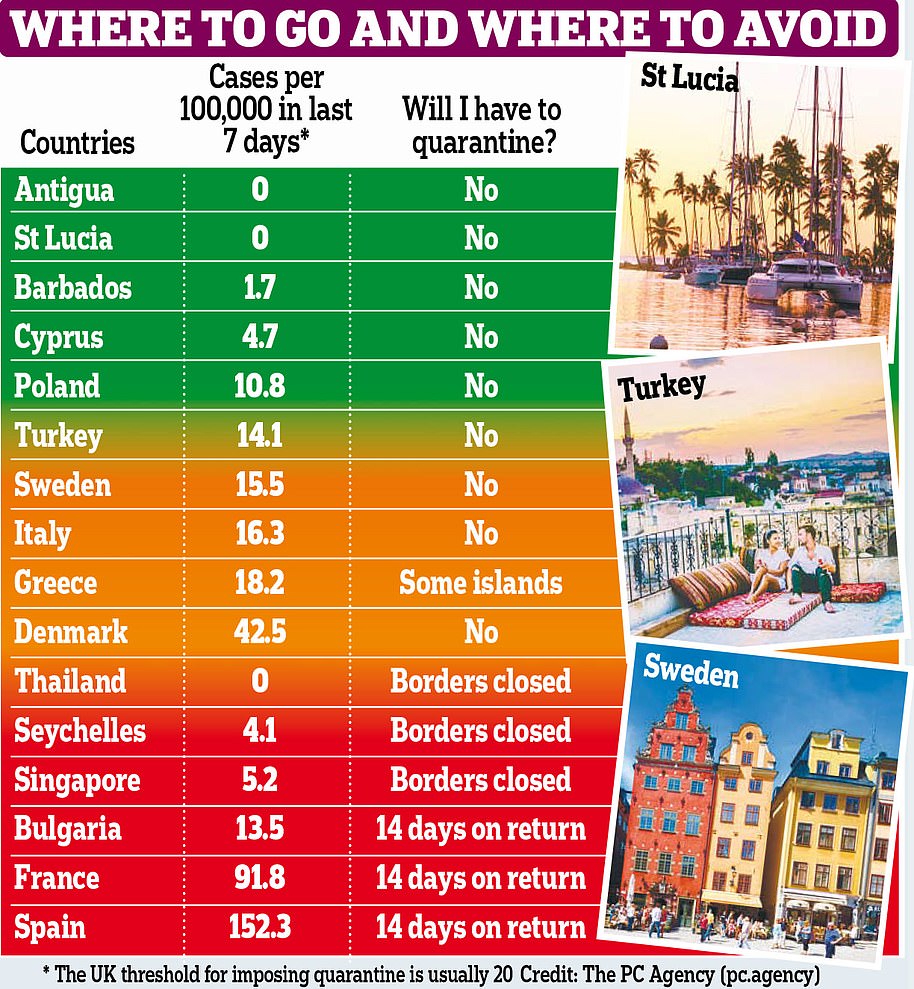 Information correct at time of going to press. Check government guidance before booking at www.gov.uk/guidance/travel-advice-novel-coronavirus